Did you know that if you are a resident of the State of Florida, regardless of the fact that you do not have any children in the education system, you now have the right, under the new Florida Education Statue, signed by Governor Rick Scott, to file a formal complaint about the materials or curriculum being taught?  Yes, you read that right.  As an educator, it is beyond frustrating to know that anyone can submit a written complaint to the Board of Education, in any public school district about what is being taught by someone who does not have a truly vested interest.  The nature of the complaint must be determined to be valid but, the cost factor to school districts who can not even provide decent wages to the teachers and staff will be one more burden on the taxpayer and take time away from what is truly important: the children!

In order to pursue the legitimacy of the claim, school districts must now hire an independent “unbiased hearing officer” to investigate the allegation and determine if the curriculum or materials is detrimental to the education of the children.  This is not only costly but time consuming.  Other concerns that have been expressed, especially by those who teach science, are that issues such as global warming or evolution will be challenged and teachers will not have the right to use these materials, even though they are researched-based and backed by the scientific community,  in order for the agendas of right-wing conservatives to be promoted; those who adhere to a creationist theory of man and discount the evidence that our world is rapidly changing and succumbing to global climate changes.  Materials that they feel are “pornographic” can also be challenged.

As an educator with years of experience, I find it disheartening to say the least that our society has sought to place limits upon our inherent rights and freedoms protected by the United States Constitution.  Why, as educators, should we not be allowed to provide our students with information that engages them in thought-provoking conversation and dialogue; to challenge and question; to think independently to make their own choices? Why should groups like, The Florida Citizen’s Alliance or those who want a revisionist version of American History with no real vested interest be given the opportunity to waste the already limited and valuable resources of school districts?  While I agree that spreading hatred and violence or using materials that contradict a code of ethics should not be allowed, the idea that limiting or restricting materials based upon personal opinion may become a reality, is frightening and threatens what real education should be.

And so it has begun…

According to the July 18, 2017 article in the Florida Times Union at http://jacksonville.com/news/schools/2015-07-18/story/petition-ban-new-books-prompts-new-debate-censorship-duval-county  by Rhema Thompson, at least 11 books have been banned from the Duval County School District Libraries including two new books by Jeanette Winter:  “Nasreen’s Secret School” and “The Librarian of Basra” both with settings in the Middle Eastern countries of Afghanistan and Iraq.  The claims that the books are violent, the portrayal of American soldiers is harsh, and that Islam is mentioned seems to me to be an hysterical reaction to the realities of the world.  While I have not read either book, the synopsis of the plots hardly seem inappropriate.  In particular, “The Librarian of Basra” is biographical in nature and is based upon a woman with strong convictions and courage in the face of war to preserve the written word. What is wrong with American students being awakened to the horrors of war; to know, in contrast, that they have the right to live in a free society; a free education; to have books to read? We should not limit and ban their experiences and continually shelter them. Students need to be aware of the realities of life so that they have the tools and background to make positive changes in the world.  To stop the fighting and the hatred. To be open and accepting of others’ beliefs and customs.  If we continue to prohibit what children can read and not give them a broad-based curriculum with a global perspective we are doomed to a world in which hatred thrives. We can not nor should put our children in protective bubble-wrap and insulate them from the world.

“I do not agree with what you have to say, but I’ll defend to the death your right to say it.” 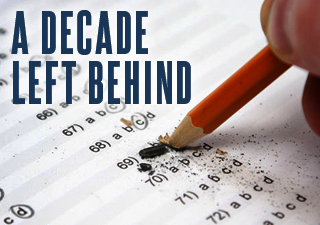 Can We Really Say Good-bye to The No Child Left Behind Act?

According to Grace Smith of Education News.org, The Federal Government will begin to take a serious look at overhauling the No Child Left Behind Act (NCLB) which was enacted by the George W. Bush administration in 2001.  The goal of the No Child Left Behind Act was to ensure that all children in the United States were given equal opportunities to succeed in the public education system especially those considered minorities or from socio-economically depressed communities.  While the intent might have been a noble one, it put undue pressures on school districts to show Adequate Yearly Progress (AYP) through high-stakes testing that by its very nature is exclusionary and biased.  What the authors of this law failed to recognize is that regardless of socio-econmic status, race, color, or creed, human intelligence is not a constant.  Human beings are not all blessed with the same intelligence levels.   People differ from one another in their ability to overcome obstacles by taking thought, to engage in various forms of reasoning, to learn from experience, to adapt effectively to the environment, and to clearly understand complex ideas.  This law failed to take into account the myriad of students with disabilities and other hurdles.

Can we expect anything new as the House of Representatives are now investigating the NCLB act and relabeling it Every Student Succeeds Act (ESSA)?  I think Gertrude Stein it best, “A rose is a rose is a rose.”  What can we as teachers and administrators really expect to change with this “overhaul”?  Even if this new law gives individual states and districts power to make their own decisions about students who are not showing adequate growth, unfair testing is still taking place.  Students are being instructed with developmentally inappropriate curriculum and expected to fit into a one-size fits all system.  Teachers are still being judged based upon how many of their students are able to pass state and district assessments.

According to the National Center of Education Statistics, the drop out rate for students of all races as of 2013 is 6.8% with the highest percentage of Hispanics at 11.7% and Blacks at 7.3%. So how is this new law going to combat the fact that minority populations are disengaged from the education system in this country?  When are schools districts going to make sure that the education students receive is engaging all, embracing all cultures, and pertinent for our changing technological global world?  When are teachers going to stop being targeted as the ‘bad” guys and penalized for the failure of students to pass assessments that truly do not reflect the variety of differentiated needs of today’s student populations?

“The definition of insanity is doing the same thing over and over again and expecting a different result. ”  Albert Einstein.